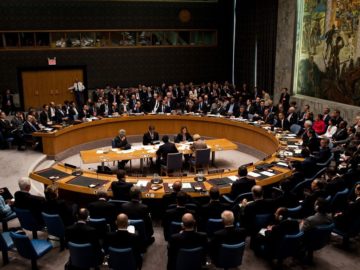 [BAGHDAD, Iraq. September 23, 2017] – The United Nations Security Council on September 21, 2017 unanimously adopted a resolution that establishes an investigative team to collect and preserve evidence of serious crimes allegedly committed by the extremist group Islamic State (also known as ISIS)—but fails to include within its mandate abuses by anti-ISIS forces.

“The UN Security Council resolution does not go far enough. The resolution must also consider abuses by anti-ISIS forces that were complicit in attacks on Yezidi people.”

Human Rights Minister Mesho also announced her Government’s intention to organize its own international tribunal on Yezidi genocide to focus on specific crimes against Yezidis and allies.

Ezidikhan’s newly appointed Minister of Justice Ms. Nallein Sowilo has likewise expressed her ministry’s intent in a statement saying, “We are resolute in our intention to bring to justice those entities—nations, organizations, and individuals—who supported, planned, and backed the heinous acts of genocide committed by Daesh against innocent peace-loving Yezidis, merely because of our nation’s very ancient oral traditions and beliefs.”

“We Yezidis are the Children of the Sun. We are the original people of Mesopotamia. Our traditions date from the dawn of humanity. We continue to live and die by our honour. We prefer to fill our lives with simple acts of devotion to God and to one another, because we want all peoples of the earth to be happy before us, even if we are the last to be happy. ”

“We can demonstrate that the Yezidis preserve the most ancient knowledge of divinity and creation. Yezidis deserve the utmost respect among all nations or peoples. This tribunal can be the platform to restore the Yezidis’ pride in themselves and their ancient traditions.”

Patrick Harrigan trained in comparative religion and Indology at the University of Michigan and UC-Berkeley as an advocate of Indigenous peoples and nations. Since 2014 he has been serving as editor, publisher and policy consultant to the Yezidi Nation. In 2022 he was appointed Secretary of the Confederation of Indigenous Nations of the Middle East and North Africa.
You might also like
United NationsUncategorized

Emergency consultations between Ezidikhan and friendly nations
Be the first to comment!
Leave a reply »