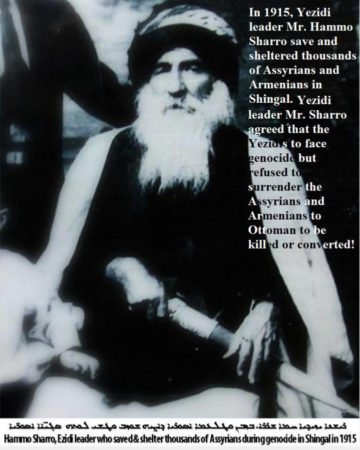 [LALISH, Nineveh, Iraq. January 21, 2018] – Prime Minister Waheed Mandoo Hammo of Ezidikhan has expressed his nation’s appreciation and gratitude towards Armenia after its parliament.

Prime Minister Waheed Mandoo Hammo’s grandfather Hammo Shiro was the Pasha (high level official in the Ottoman Empire) and charismatic leader of the Yezidis in the late 1800s to early 1900s who offered sanctuary in Yezidi territory in the Shingal to at least twenty thousand Armenians. He is credited with having saved their lives in a bold and courageous act of defiance toward marauding Turks and Kurds during the Armenian genocide between 1915 and 1917.

The National Assembly of the Republic of Armenia:

Armenian MP Rustam Makhmudyan, a Yezidi, urged Armenia’s Parliament to “not only condemn the genocide against the Yezidi people, but also investigate the crimes through international agencies, pursue the perpetrators of the crimes and hold them accountable, and to take measures to prevent similar actions in the future”.

Armenian MP Rustam Makhmudyan, a Yezidi, urged Armenia’s Parliament to “not only condemn the genocide against the Yezidi people, but also investigate the crimes through international agencies, pursue the perpetrators of the crimes and hold them accountable, and to take measures to prevent similar actions in the future”.

The Yezidis have been persecuted for generations. They were denied education by the Ottoman Empire in the past and by the Iraqi government in the present. The new government plans to bring a fundamental change to these conditions. Under persecution, living under Sharia law, Yezidis have been denied fundamental human rights in utter violation of international agreements.

“The ancient Yezidi nation is distinct from Kurds in both faith and civilization. Out of the compulsion to protect Yezidi culture and civilization we present our rights as an ancient, indigenous people of northern Iraq to establish the formation of this Provisional Government of Ezidikhan. This council of the nation of Ezidikhan vows that a fair investigation to bring to justice all those who committed acts of genocide against our brothers, sisters and mothers will be carried out and none except the innocent will be spared.”

Stating further his convictions the Prime Minister said, “We shall rebuild our country and obtain the return of thousands of Yezidis who had to flee the violence.”

Patrick Harrigan trained in comparative religion and Indology at the University of Michigan and UC-Berkeley as an advocate of Indigenous peoples and nations. Since 2014 he has been serving as editor, publisher and policy consultant to the Yezidi Nation. In 2022 he was appointed Secretary of the Confederation of Indigenous Nations of the Middle East and North Africa.
You might also like
ArmeniaGenocideUncategorized

Ezidikhan PM Seeks Constructive Relations with Armenia
Be the first to comment!
Leave a reply »