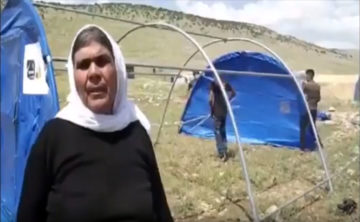 Recently when Yezidi IDP camps in Kurdish areas were deluged by rains and flash floods, the Ezidikhan Government turned to the Government of India when neither Baghdad nor Kurdish Regional Government responded to its urgent requests for assistance.

On May 7th 2018, more than 25,000 Yezidis living in camps were inundated by torrential rains and flash floods that forced them out of their camps. Many families lost their tent shelters along with furniture and most of their belongings.

On May 31st, over fifty new tents together with supplies were delivered to Yezidi families that had lost their tents to the flash floods. Ezidikhan Government officials who had helped to source help from India were also present to help to deliver and set up tents for Yezidi families.

In a short video, Ezidikhan Government representative Sfean Waheed Mando thanked all who helped in the effort including Yezidi Human Rights Organization-International and Sewa International.

Prime Minister Waheed Mandoo Hammo, speaking of the suffering and despair of Yezidis living in Iraq said, “No one outside of Yezidis will care until Yezidis act! Yezidis must mobilize and take action on the local level. That is the answer to the disorder…as this has been the answer all along.”

First Deputy Prime Minister Barjis Soso Khalaf, who was also involved in the process of obtaining India’s help and personally helped to purchase and deliver new tents for flood victims, said, “We are grateful for the full support of the Government of India and others in this effort to help Yezidi flood victims. We are grateful beyond words for their standing in support of the Yezidi community.”

Minister of Justice Nallein Sowilo reiterated her government’s appreciation, adding, “When the international community failed to help Yezidi victims of flooding, India was the only nation that offered their support. We as Yezidis are grateful for this partnership and support.”

Patrick Harrigan trained in comparative religion and Indology at the University of Michigan and UC-Berkeley as an advocate of Indigenous peoples and nations. Since 2014 he has been serving as editor, publisher and policy consultant to the Yezidi Nation. In 2022 he was appointed Secretary of the Confederation of Indigenous Nations of the Middle East and North Africa.
You might also like
Barjis Soso KhalafIndiaUncategorized

Kurds and Iraq seek to extort Ezidikhan denial of Genocide
Be the first to comment!
Leave a reply »