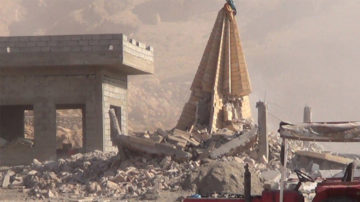 The MoCH says the services to be provided include “the opening of roads, removal of debris, cleaning up of waste, and rehabilitation and reconstruction of Yezidi shrines located in Shingal Mountain, in addition to installing staff in governmental offices.” According to reports, the ministry also plans to open government buildings in order to begin providing services like issuing passports and identity cards.

According to the ministry’s statement, the rebuilding process is now starting “in the center and the outskirts of Shingal District to restore life and services to citizens.”

In a statement issued on June 17, Prime Minister Hammo said, “The central government’s expressed commitment to rebuild Shingal is an important first step toward bringing Iraq’s communities together. We welcome and encourage this partnership and friendship with the Iraqi Government.”

“The Government of Ezidikhan has been working for months to get Baghdad to contribute to the reconstruction of Ezidikhan, especially Shingal and nearby villages which are high on the list.”

“The Government of Ezidikhan will monitor Baghdad’s actions to ensure that Baghdad lives up to its promises and does not renege on its agreements.”

The Islamic State (IS) overran the predominantly Yezidi-inhabited Shigal area in August 2014, killing and abducting over 15,000 and displacing nearly 50,000 from the district. In addition to the human cost, destructive acts by IS and the battles to remove the jihadist group from Shingal has left most of the city in rubble.

Though it has been years since IS’s ouster from Shingal in November 2015, a severe lack of basic services, stability, and government efforts to revitalize the region have prevented Yezidis of Shingal from returning to their villages and homes.

Patrick Harrigan trained in comparative religion and Indology at the University of Michigan and UC-Berkeley as an advocate of Indigenous peoples and nations. Since 2014 he has been serving as editor, publisher and policy consultant to the Yezidi Nation. In 2022 he was appointed Secretary of the Confederation of Indigenous Nations of the Middle East and North Africa.
You might also like
reconstructionShingalUncategorized