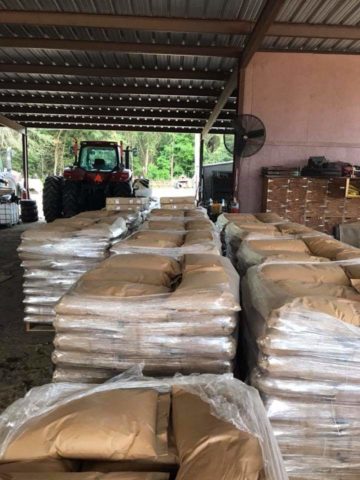 “The government of Ezidikhan is taking charge of restoring food production and the economic life of our people as we begin to rebuild our homeland,” said Interior Minister Hussein. The Government of India is shipping bags of seeds and preparing to provide training for our agriculture students. A marketing plan is in process to evaluate the best approaches to finding and supporting economic markets for Ezidikhan’s farm products as well.”

“We must take action to establish permanent solutions to the social, economic and political problems faced by Ezidikhan citizens,” stated the Interior Minister. “Toward that end, the Seeds of Life pilot project is only the first of many steps to restore the normal lives of our people who have suffered so much. The Governing Council is considering a resolution to authorize more than USD $11 million for a two-year Seeds of Life program to restore 2,000 to 5,000 Ezidikhan family farms.”

This August it will be five years since Daesh and its allies brutally attacked the peoples of Ezidikhan. Ezidikhan’s government has set in place plans to rebuild and organize the return of its citizens to Ezidikhan soil while taking diplomatic steps to establish organizational mechanisms to prosecute the perpetrators of genocide. More than half the Ezidikhan population was forced into internally displaced camps (IDP) and has been receiving some aid from international state organizations as well as non-governmental organizations. Many others have returned to devastated farms, villages and communities sown with land mines.

“The Ezidikhan government began negotiating with the Iraqi government in September 2017 in an effort to establish constructive cooperation to rebuild Ezidikhan,” stated Prime Minister Barjis Soso Khalaf, “but Iraq’s government has failed to live up to its promises.”

Non-governmental opinion surveys conducted among Ezidikhan citizens show that Yezidis in the IDP camps and destroyed villages set a high priority on the restoration of food production and programs to provide for women’s health and trauma. The Ezidikhan Governing Council has approved policies and programs to implement restoration plans as demonstrated by efforts to work with the Government of India to receive aid to build several water wells and develop the farming program.

Kurdish and other interests make no secret of their aim to occupy and control Ezidikhan’s people and resources. These water and food production projects initiated by the Government of Ezidikhan show that helping Yezidis to return to Shingal and rebuild their lives is the principal aim of Yezidis and Ezidikhan alike.

Patrick Harrigan trained in comparative religion and Indology at the University of Michigan and UC-Berkeley as an advocate of Indigenous peoples and nations. Since 2014 he has been serving as editor, publisher and policy consultant to the Yezidi Nation. In 2022 he was appointed Secretary of the Confederation of Indigenous Nations of the Middle East and North Africa.
You might also like
Agriculture

Yezidi families in Turkey attacked again amid resettlement dispute
Be the first to comment!
Leave a reply »