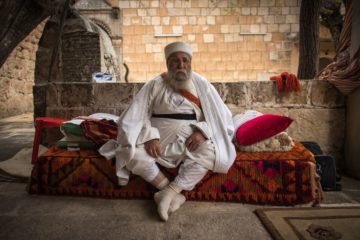 Yezidi supreme spiritual leader the Baba Sheikh Khurto Hajji Ismail has issued a statement in the wake of the multiple suicide bombings in Sri Lanka that were inspired and directed by Daesh. Baba Sheikh’s statement expresses the Yezidi people’s sympathy for Sri Lankans individually and collectively, for Yezidis well understand the horror and agony caused by Daesh‘s ideology of intolerance and hate.

The Baba Sheikh’s statement, issued one week after the Easter Sunday bombings of three packed churches and several five-star hotels in Colombo resulted in the death of hundreds and injuries to many hundreds more, is as follows:

The indigenous Yezidi nation of Ezidikhan situated in present-day northern Iraq is reckoned by the Yezidi calendar to be 6,769 years old. Her people preserve knowledge and traditions dating back to ancient Mesopotamia. The traditional Yezidi homeland of Ezidikhan is also situated at a great crossroads of the Middle East that competing interests including the great powers have long sought to control for its mineral wealth and strategic importance–which explains in part why those interests share a common interest in driving Yezidis out of Ezidikhan–“for their own safety”.

As in Sri Lanka where Roman Catholics and foreign tourists were targeted by Daesh for their religion, so too have Yezidis been singled out for acts of inhuman cruelty by Muslim extremists for centuries, most recently and terribly with the August 2014 acts of mass genocide against Yezidis by Daesh.