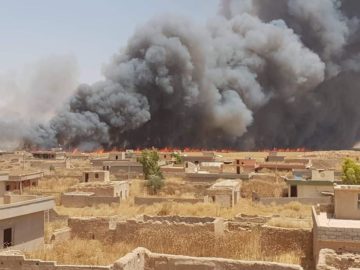 [Shingal, Ezidikhan. 22 June 2019] Dr. Abdul Qader Al-Rawi, the Senior Investigator for the Ezidikhan Investigative Team on Genocide, has been shot and killed yesterday outside his home by an assassin at close range while leaving home to his clinic in Anbar Province.

Abdul Qader Al-Rawi was born in Baghdad, Iraq and graduated high school in 1987. He was educated at Almustan Syria University, Medical School where he was awarded the degree in Genetic Engineering and Biotechnology. He and his family made their home in Karkh, Iraq.

Dr. Al-Rawi was appointed to serve as the Senior Investigator for the Ezidikhan Investigative Team on Genocide by the Ezidikhan Governing Council under the Winter Solstice Resolution of 21 December 2018. The Investigative Team was established to determine the perpetrators who may have committed genocide in violation of customary Ezidikhan law and international laws prohibiting cultural and physical genocide intended to destroy the Yezidi in whole or in part.

The primary focus of the thirteen member Ezidikhan Investigative Team on Genocide headed by Dr. Al Rawi is responsible for identifying perpetrators of alleged acts of genocide committed against the Yezidi and neighboring indigenous nations from 2000 to the present.

Dr. Al Rawi’s recently opened investigation focused on the burning of Yezidi farm crops and the role that governing authorities and or militias may have played in as culpable parties.

Based upon exchanges with Al Rawi and the circumstances of the crop fires in lieu of demanded taxes on Yezidi farmers it is believed that Al Rawi death was a political assassination designed to thwart investigations of parties potentially involved in the widespread arson of Yezidi croplands in recent weeks. The investigations shall continue.

Patrick Harrigan trained in comparative religion and Indology at the University of Michigan and UC-Berkeley as an advocate of Indigenous peoples and nations. Since 2014 he has been serving as editor, publisher and policy consultant to the Yezidi Nation. In 2022 he was appointed Secretary of the Confederation of Indigenous Nations of the Middle East and North Africa.
You might also like
GenocideinvestigationGenocide

Kurds and Iraq seek to extort Ezidikhan denial of Genocide
Be the first to comment!
Leave a reply »