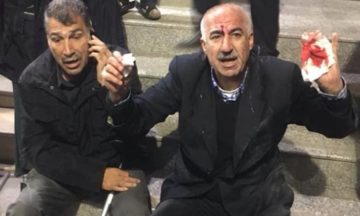 [Batman Merkez, Turkey. Dec. 23, 2019] Yezidi families in Turkey’s southeast have recently been exposed to several attacks by members of the Karabulut and Biter clans, to whom they had temporarily entrusted their lands in the 1990s before leaving for Europe. Although the Turkish courts have ordered these two clans to give the lands back to their rightful owners, the clans have been harassing the families to deter them from resettling in their lands.

Yezidi families of the southeastern province of Batman have been facing attacks by two clans, to whom they had entrusted their lands in the 1990s.

The families left their native villages in 1992 and went to Germany, exhausted from the years-long conflict between the Kurdistan Workers’ Party (PKK) and Turkish military. Some of these families from the village of Kuşçukuru (Kelhok) in the district of Beşiri gave their lands’ temporary use and cultivation rights to the leaders of the Karabulut and Biter clans during this time period.

Following the launch of a peace process between the PKK and the government in 2013 and thereby a normalization of every day life, Yezidi families started to return to their hometowns. However, despite the previously struck agreements between the families and the clans, the latter withheld the lands for their own use, prompting the Yezidi families to file a lawsuit.

The Turkish courts ruled in favor of the families and ordered the clans to give the lands back to their rightful owners. But this time, the clans started to harass the families, undertaking both verbal and physical assaults, in an attempt to deter them from resettling in their lands.

One of these families is Erkiş family, some members of whom were again attacked on December 17 by various members of the Karabulut and Biter families. “I have a village, but for the last eight years, we have been living in hotels. We have been attacked four times in the last one month. We are awaiting help [from the authorities],” Nedim Erkiş told Duvar Gazete.

Erkiş said he and his relatives were attacked in front of the hotel they are staying at in Batman. “We have filed a criminal complaint regarding the assailants. Due to the existence of camera recordings, the assailants have been detained. One of our friends was attacked in the head; he is heavily injured. We all have injuries on our backs, legs,” Erkiş said.

Erkiş also said that he and his family members were able to plow their lands in the village of Kuşçukuru on Dec. 17 thanks to the presence of soldiers accompanying them. “The court has given a ruling in our favor. And today, the regiment commander, together with the soldiers, has provided our security and we were able to plow our land. These lands belong to us. No matter how many times they attack us, we’ll not give up on our case. We’ll win it; Kelhok will win,” he said.

The attacks were allegedly carried out by Ferhat Abdi Sahin, a local PKK commander.

Patrick Harrigan trained in comparative religion and Indology at the University of Michigan and UC-Berkeley as an advocate of Indigenous peoples and nations. Since 2014 he has been serving as editor, publisher and policy consultant to the Yezidi Nation. In 2022 he was appointed Secretary of the Confederation of Indigenous Nations of the Middle East and North Africa.
You might also like
Agriculture