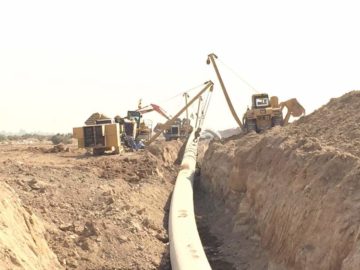 In November 2019, the Business & Human Rights Resource Centre was contacted by the representative of the Yezidi community in Iraq, who alleged that oil giant Exxon Mobil is responsible for a number of human rights abuses against Yezidi in Anbar, Fallujh, Mosul and Tikrit.

The group had submitted a complaint to the Human Rights Council (HRC) in July 2019 alleging the following in regards to the activities of Exxon Mobil within a broader framework of attacks against the Yezidi from government:

Both the HRC complaint and news outlets highlight the lack of consultation available to Yezidi, in contravention of the Iraq constitution which states that indigenous communities must be consulted when land decisions concerning them are being taken. Further, Exxon allegedly failed to provide copies of the signed contracts to the landowners.

Reporting from Reuters claims that Exxon’s deal is not legal under Iraqi legislation as it was signed with the Kurdish Government and not the Iraqi Government.

ExxonMobil has been accused of employing local security forces in oil-rich Kurdistan who shot at civilians, killing two in 2013…

Salma Houerbi, [of] Business and Human Rights Resource Centre, said: “We are concerned about these serious allegations. Oil companies must take steps to protect the human rights of people affected by their operations, including from violence or loss of land – especially in conflict zones.”

She added: “Governments also play a crucial role in managing the extractives sector and making sure the rights of indigenous communities are respected.”

These accusations are baseless.

ExxonMobil provides a human rights awareness training program for personnel who work in high-risk areas, including Iraq… [including[ information about the Voluntary Principles on Security and Human Rights, the requirements of ExxonMobil’s Statement and Framework on Security and Human Rights and expectations regarding the implementation of the framework in a given county.

ExxonMobil condemns human rights violations in any form and has actively expressed these views to governments and others in countries in which our affiliates operate around the world.

Iraq’s Kurdish region has signed an exploration deal with Exxon Mobil, a Kurdish official said on Sunday… Iraq’s central government, which has long-running disputes with the Kurdish region over oil and land, has said Baghdad would consider a deal between Exxon and the KRG illegal…

“It is a binding contract,” [Natural Resources Minister Ashti] Hawrami said at an oil and gas conference in the Kurdish capital, Arbil. “It was signed completely on the 18th of October 2011”..

Baghdad disputes the validity of the contracts, saying it has the right to control development of the world’s fourth largest oil reserves.

Author: Nallein, on behalf of Yezidi communities in Anbar, Fallujh, Mosul and Tikrit

In 2011, Rex Tillerson, then President of Exxon, signed an agreement with the Kurdish Government to allow for oil drilling on Yezidi lands.. illegal under Iraqi law because the Iraqi Constitution states that land decisions must involve the indigenous populations…

In 2013, Exxon employed local security forces which fired upon Yezidi activists, killing two of them. The local Kurdish Government and Exxon refused take any action. They turned a blind eye to any claim that Yezidis had for their ancestral land and bought land seized from the Yezidis.

It is estimated that between 2011 and 2013 that over 5,000 Yezidi were forced from their lands so that Exxon could conduct oil drilling…

Gullan residents, along with… the newly formed [community network] Assembly for the Protection of the Environment and Public Rights, greeted Exxon trucks with placards denouncing the project… They objected for environmental and social reasons. They tried to be part of the process…

“We went to talk to the oil company,” Dara Ibrahim, a 25-year-old founding member of the environmental group, told me. “We asked if a member of our group could go with the oil company. They said absolutely not”… Several villagers made nervous references to [signed contracts]… Exxon did not leave behind a copy… the villagers could not recall the precise terms of the agreement.