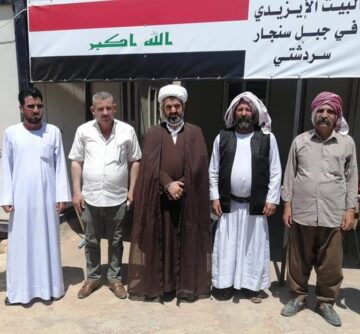 [Shingal, Ezidikhan. 27 October 2020] Nallein Sowilo, one of the principal co-founders of the Provisional Government of Ezidikhan and its first Minister of Justice, carries on her slender shoulders a heavy burden. She must somehow achieve peace with justice for the long-suffering people of her ancient Yezidi nation, who remain traumatized and scattered by the 2014 assault by ISIS. Years of ceaseless toil and negotiations, however, are at last beginning to bear fruit.

Q. Madam Justice Minister, relate to us how the Ezidikhan Government managed to pull off such a unique, even spectacular achievement of  proposing, negotiating and finally hosting a treaty confederation of fifteen indigenous nations of the Middle East within such a short time?

A: “Actually, this idea occurred to me on the very day of the ISIS attack on Shingal on August 3rd, 2014. I was about to fly from Turkey to Iraq when the assault suddenly began.”

“We call ourselves an Alliance because we are all natural allies. Our nations represent the Middle East’s ancient heritage of ethnic and religious diversity.”

“That trip was canceled, but on my flight home I started thinking about autonomy for Ezidikhan and a confederation and genocide tribunal. I knew that for at least forty years not only Ezidikhan wanted autonomy, but other minority communities as well. However, no nation had undertaken a plan to realize autonomy.”

“From January of 2015 through July 2016 I was again in Iraq where I met with leaders of most of these communities. Together we laid the groundwork for our Confederation.”

As the conference date approached, there even came a last-minute rush of nations eager to join. Finally, fifteen indigenous nations signed onto the Treaty of 2020 when it was signed on August 21 in Shingal.

“The original date was set last year for this August conference. However, by June we realized other indigenous nations wanted to join the treaty, including indigenous tribes of North Africa. Then the PKK and the Kurdish government made a deal to enter Shingal throwing off the date. We had start signing some earlier.”

“This Treaty represents a fresh start for indigenous communities of Iraq and the Middle East. We expect that it will lead to autonomy that asserts the rights of all signatories to the Treaty.”

“Ezidikhan is firmly committed to serve justice to all victims of genocide, whether they are Yezidis or indigenous minorities of other nations,” Ms. Sowilo declared at the conclusion of the conference. “We call ourselves an Alliance because we are all natural allies. Our nations represent the Middle East’s ancient heritage of ethnic and religious diversity.”

The Confederation of Indigenous Nations of the Middle East and North Africa (CINMENA) that has arisen from the upstart Ezidikhan Justice Minister’s initiative is still growing. Justice Minister Sowilo declined comment when asked what will come next, but observers speculate that more surprises could be in store soon for the established power structure of the Middle East.

Confederation of Indigenous Nations of the Middle East and North Africa

Patrick Harrigan trained in comparative religion and Indology at the University of Michigan and UC-Berkeley as an advocate of Indigenous peoples and nations. Since 2014 he has been serving as editor, publisher and policy consultant to the Yezidi Nation. In 2022 he was appointed Secretary of the Confederation of Indigenous Nations of the Middle East and North Africa.
You might also like
AutonomyConfederationAutonomyIndigenous nations

Proclamation: Establishment of the Provisional Government of Ezidikhan