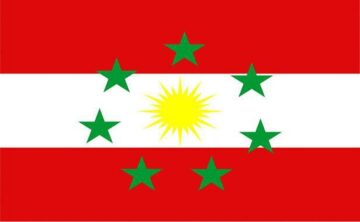 Baba Salem: “We have adopted a new flag that is suited for sheikhs to use as part of their secular role in governance that does not coincide with religious matters. It acknowledges the role of sheikhs as secular leaders.”

Baba Salem explains that the new flag was adopted for Ezidikhan government use only for Sheikhs not for other religious uses for sheikhs.

According to Baba Salem Daoud, “The symbolism of the color of the flags is as follows: