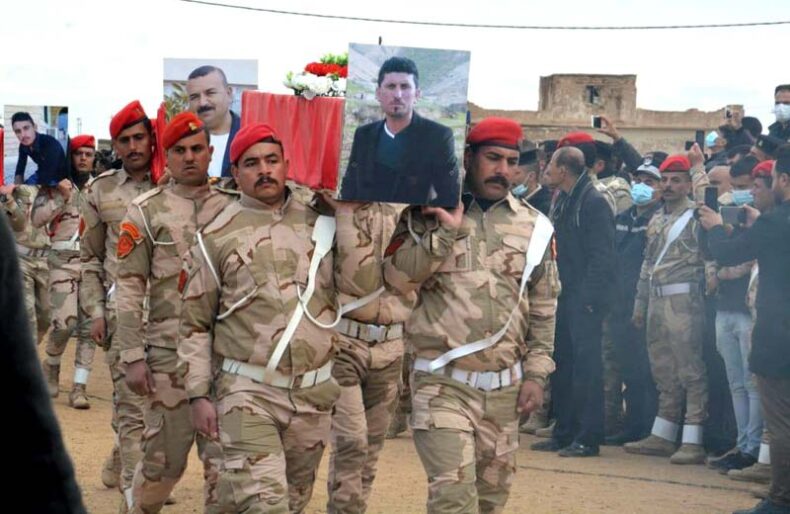 [Kocho, Shingal, Iraq, 6 Feb. 2021] Displaced Yezidi survivors today buried the remains of their loved ones who were brutally massacred on August 15, 2014, by Da’esh (aka, Islamic State in Iraq and the Levant / ISIL / ISIS) in Kocho. The burial ceremony was open to the public.

On Thursday, February 4, an official government ceremony was held in Baghdad as the remains were loaded into military vehicles and driven in a convoy to Kocho.

Kocho survivors, organized by the mukhtar of Kocho, Nayef al Jaso, have worked years for this solemn day.

“The nation of Iraq grieves for Yezidi victims of Da’esh. We vow to defeat the extremist ideology that led to this tragic betrayal.”

On June 9-10, 2014, Da’esh took control of Mosul. On July 14, 2014, the Iraqi Border Control forces withdrew from Nineveh and were replaced by 11,000 Peshmerga forces from Kurdistan. Da’esh attacked the Yezidi ethno-religious minority in the early morning hours of August 3, 2014.

By 7:30 am, the Peshmerga forces who had been guarding the Yezidi villages, were heading to Kurdistan, under orders to retreat. This left the Yezidis undefended and exposed to the attack. Yezidi Peshmerga commander, Qassim Shesho, asked the other commanders to leave the heavy equipment behind, but they refused. Qassim Shesho went to Sherfedin, his childhood home on the north side of the mountain. Residents of Gir Zerik and Siba Sheikh Khuder, on the south side of Shingal Mountain, were attacked beginning at 2:10 am. They fought until their ammunition ran out at 7 am.

Da’esh came from the directions of Baaj from the southwest, Tal Afar and Mosul from the east, and Syria and Rabia from the northwest. They were joined by many Arabs living in the neighboring villages in Shingal. They swept through Shingal on a pre-planned, coordinated, vicious killing rampage.

By 2 pm, all 350,000 Yezidis living in Shingal had fled from their homes. Those without vehicles drove to Kurdistan before the roads were blocked by Da’esh. Between 30,000 and 50,000 Yezidis climbed to safety on Shingal Mountain where they were stranded for nine days without food or water. Between 7,000 and 10,000 Yezidis were killed or captured.

Residents from Kocho were surrounded from August 3 and unable to escape. Of those who tried to escape on August 3, approximately 50 were killed by Da’esh. The rest remained besieged in Kocho.

For twelve days, every Yezidi in Kocho and many around the world called governments and begged to be rescued. Nayef Jaso, Kocho mukhtar, was in Duhok. He later explained:

“I sent my message to the Shia Grand Ayatollah Sayyid Ali al-Sistani, the most respected religious leader in Iraq. Sistani sent my message to Prime Minister Maliki: ‘Kocho needs to be rescued.’ The next day the Secretary to the Ministry of Interior of Iraq, close to Maliki, called me and we talked. After our talk, the Secretary of the Ministry signed an order to rescue Kocho. This order was sent to the operations control room for the Iraqi Army in Baghdad. This happened sometime between August 8 and 12. But no help was ever sent. My source told me that Americans were in the control room when Kocho was attacked.”

The Da’esh leader named Abu Hamza came four times with his followers to meet with Ahmed al-Jaso, the leader of the al-Mandkany tribe of Kocho, and with all the adult men. Da’esh asked the Yezidis to convert to Islam, but everyone refused. On the third visit, Da’esh promised to take the Yezidis to the mountain in exchange for their gold, phones, cars, sheep, and property. When Da’esh arrived on the morning of August 15, they ordered everyone to gather at the school.

At the school, Da’esh kept the men and teenage boys downstairs in the main hall. They sent the women and children upstairs to the classrooms. They asked the men again if they would convert to Islam. All refused. Upstairs, they asked the women to convert. They too refused.

Between 11 AM and noon, Da’esh took the males outside in groups of 20 to 50, loaded them into cars and pickup trucks and drove them to spots on the periphery of the village where they executed them without mercy. After the executions, Da’esh abducted all the women and children. On August 16, 2014, 79 Yezidis, mostly older women and some boys, were executed at nearby Solagh Institute. The young women were raped and trafficked for sex. Nineteen men and teenage boys survived the Kocho mass executions with their bullet wounds. Survivors said they could hear planes flying overhead the entire time during the attack. Later research indicates it was an American drone.

Among the male survivors is Khalid Murad Pissee who returned in May 2017, to live in the empty village of Kocho with a small team of Kocho men. They defended the open mass graves until UNITAD began its excavations in March 2019.

Khalid’s sister, Nadia Murad, was awarded the Nobel Peace Prize in 2018 for her efforts to get help for the surviving women and girls who were abducted and raped by Da’esh. Approximately 3,000 women and children have returned from Da’esh captivity, while approximately 2,300 are still missing. Germany accepted 1,100 of the survivors with their children. More remain in camps in Kurdistan, unable to find asylum.

In March 2019, a memorial service was held in Kocho to open the school as a museum with photos of approximately 600 Yezidis killed in Kocho and nearby Solagh Institute. UNITAD began excavating 16 grave sites and sending the remains to Baghdad for DNA testing. Of the 437 men and teenage boys in Kocho on August 15, 2014, the remains of only 104 were identified. Wives and children of the others refer to the men as “missing.”

In 2020, UNITAD exhumed 79 bodies at Solagh Institute. Most of them were older women and some boys from Kocho that Da’esh killed on August 16, 2014, the day after the Kocho massacre.

Kocho was the first of many remaining sites yet to be exhumed by the UNITAD team. Massacres of Yezidis also happened on August 3, 2014, in Hardan, Hamadan, Qine valley, Zuleyli valley, Musa valley, Siba Sheikh Khudir, Gir Zerik, Sunoni, Duguri, Solagh, Sinjar city and other sites. More than 75 execution sites have been identified. Dogs, rain, wind, and fires set to wheat and barley fields in 2019 have destroyed many of the bones which were exposed to the elements.

UNITAD’s mandate is to investigate the mass killing of unarmed Iraqi air force cadets from Tikrit Air Academy (also known as “Camp Speicher”) in June 2014, attacks committed by Da’esh against the Yazidi community in the Sinjar District in August 2014, crimes committed by Da’esh in Mosul between 2014 and 2016, and crimes against the Christian, Kaka’i, Shabak, Shi’a, Sunni, and Turkmen communities. UNITAD’s investigations are focusing on those Da’esh members who bear the greatest responsibility among the leadership as well as regional and mid-level commanders.

Dr. Amy L. Beam is author of “The Last Yezidi Genocide,” available in English on Amazon. It will be published in Arabic and an e-book in 2021. CONTACT: am*****@ya***.com. Public Facebook: amyLbeam

Patrick Harrigan trained in comparative religion and Indology at the University of Michigan and UC-Berkeley as an advocate of Indigenous peoples and nations. Since 2014 he has been serving as editor, publisher and policy consultant to the Yezidi Nation. In 2022 he was appointed Secretary of the Confederation of Indigenous Nations of the Middle East and North Africa.
You might also like
Amy BeamKochoGenocide