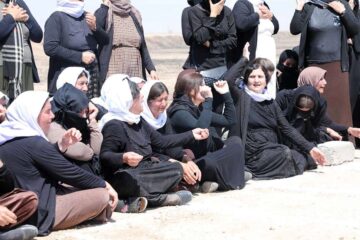 NOTE: This translation is provided by Amy L. Beam on March 3, 2021, and should not be considered the final legal wording or numbering. The following English translation was made from the Arabic markup showing the original proposed law and the proposed modifications. Some Articles and paragraphs were deleted. This will necessitate renumbering the Articles and paragraphs in sequential order.

This legislation was first introduced to the Iraqi parliament in 2019. It was modified by recommendations of a committee and voted into law in Baghdad, Iraq, on March 2, 2021.

“Today’s passage of Iraq’s Yazidi Survivors Bill is an important first step in acknowledging the gender-based trauma of sexual violence and need for tangible redress.”

For the purpose of this law, the following expressions shall mean this:

(1) The female survivor – Every woman or a girl that faced sex abuse crimes like kidnapping, sex enslavement, selling her in the slave market, separating her from her parents, forcing her to change her religion, forced marriage, pregnancy and forced abortion or harming her physically or mentally by Da’esh since August 3, 2014, and freed after that date.

This law applies to:

(1) Every female Yazidi survivor that was kidnapped by the Da’esh group and freed after that.

(2) The women and girls from the Turkmen, Christianity, and Shabaky ethnicities who faced the same crimes that were mentioned in paragraph (1) of this article.

(3) The Yazidi children survivors who were under 18 years old at the time of the kidnapping.

(4) The Yazidi, Turkmen, Christian, and Shabak survivors from the killing operations and the mass killing that Da’esh did in their places.

(1) Establish a general Directorate for the Female Yazidi Survivors’ Affairs that is linked with the Ministry of Labor and Social Affairs. The headquarters shall be in Nineveh and have the rights to open branches in the places where the female Yazidis are located whenever needed.

(2) The directorate that was mentioned in paragraph (1) of this article shall be run by an employee with the title “Director General” from the Yazidi ethnicity with at least a college degree in law or management and have experience and practice no less than ten years in his or her jurisdiction and shall be employed by the Council of Ministers.

The goals of this law are to provide:

(1) compensation, financially and morally, for the female survivors that are covered by this law and to secure a decent life for them;

(2) rehabilitation and care of the female survivors that are covered by this law, and to make the necessary procedures to integrate them into society and prevent the recurrence of the violations that took place against them.

The Directorate shall reach it goals by these processes:

(2)  Offer the needed care for the female survivors and the ones who are covered by this law.

(3)  Coordinate with all government departments and national and international organizations to support the female Yazidi survivors and the ones who are covered by this law.

(4)  Secure special educational opportunities for the female survivors and the ones who are covered by this law.

(5)  Secure job and employment opportunities for the female survivors to achieve their economic and social well-being.

(6) Open medical centers and provide mental rehabilitation for the female survivors and open health clinics inside and outside of Iraq.

(7)  Search for the men, women, and children who were kidnapped from the Yazidis, Turkmen, Christians, and Shabak, whose fate is still unknown, with coordination with the official agencies and the victims’ families, and process their legal status granting them benefits and compensation to them or their families in accordance with the relevant laws.

(8) Coordinate with the Martyrs Foundation, Mass Graves Affairs and Protection Department in regards to the mass graves to continue all the procedures in searching for, investigating, and opening the mass graves, unveiling the identity and returning the remains to their families to bury them in a proper way.

(9) Coordinate with the investigation and prosecution and with international committees to investigate and collect all the evidence and provide them with all the statistics, data, and evidence that contribute to documenting and proving the crimes Da’esh did so as to help prosecute those who did these crimes.

Deleted – The law applies to the children born of the female Yazidi.

Deleted – Establish a court in the Sinjar district to process the civil status for the newborn from the female survivors.

(1) Enroll the female survivors and the ones who are covered in this law with a monthly salary not less than double the minimum retirement salary that is stated in the retirement law number (9) in 2014 and its edits.

(4) The female who is covered by this law will be granted a piece of residential land with a mortgage loan excluded from the rules and laws and dictions of the Revolutionary Command Council (dissolved) number (120) for the year 1982 or a free housing unit.

(5)  The females that are covered by this law will have the rights to go back to study excluding age restrictions.

(6) The female survivors and the ones who are covered in this law have the priority in employment opportunities by a 2% chance.

(1)  The crimes that Da’esh did against the Yazidis and other ethnicities of Turkmen, Christians, and Shabak are considered as genocide and crimes against humanity.

(2) The Ministry of Foreign Affairs shall coordinate with the official agencies to define to international forums the crimes that were mentioned in paragraph (1) of this article, especially the ones that were against the female survivors and the ones that are covered by this law.

(3)  The Ministry of Foreign Affairs handles and coordinates with the official agencies to prosecute the criminal cases against the ones who did the crimes in paragraph (1) of this article and cooperate for delivering the criminals so they face prosecution in the specialized courts.

(1) The date August 3rd in every year shall be considered as a national day to define what happened to the Yazidis and other ethnicities and the crimes they faced and provide the special media coverage to this day showing what Da’esh did against them from the abuses, kidnapping, sexual violence crimes, enslavement, and displacement.

(2) The Ministry of Culture and the Baghdad mayoralty and the agencies to make the necessary decisions to immortalize the Yazidi and other ethnicity victims and make statues, monuments, and exhibitions in this matter.

(1) The ones who are accused of kidnapping or enslaving a Yazidi shall not be given any pardon or special amnesty.

(1) Establish a committee to check the applications of the female survivors and the others who are covered by this law from the Ministry of Labor and Social Affairs, and it consists of:

(2) The committee shall decide on the validity of the requests submitted to it within a maximum of ninety (90) days from receiving the submission.

(3) The applicant is entitled to appeal the decision in front of the committee within thirty days from the date of the decision; the committee shall reconsider and review the case, and in case it is rejected for the second time, the applicant can appeal it in the special court and its decision shall be final.

(4) The committee shall open a web application to receive the requests and to look into it from inside and outside Iraq and the approval shall be given after an interview with the applicant in front of the committee that was established in paragraph (1) of this article, so it becomes easier to receive their financial rights according to this law.

(5) The female percentage in the committee that was mentioned in paragraph (1) of this article shall not be less than 30%.

(6) The committee that was mentioned in paragraph (1) of this article shall not have less than two meetings per the week.

(7) The committee shall start its meeting when a majority of its members are in attendance.

(8) A simple majority is required to pass a vote. In case there is a tie vote, the president’s vote shall be chosen.

The Council of Ministers shall issue instructions to enroll in this law in less than 90 days after being published in the newspaper.

This law is effective from the date it is published in an official newspaper.

Compensation for female survivors and those included in this law does not prevent compensation for them according to local laws or special international decisions related to them.

The crimes that were committed by Da’esh against the Yazidis and the other ethnicities (Christians, Turkmen, and Shabak) are considered as a genocide and crimes against humanity. Because of the physical, mental, social, and financial damage to all of the victims, especially women and children, and to process and fix the harm and damage and the negative effects and for giving the needed rights for the female survivors and the ones who are included in this law, and rehabilitation and reintegration into society and as compensation for harm and compensation for what happened to them and female survivors especially and to protect them and protect their areas.

Patrick Harrigan trained in comparative religion and Indology at the University of Michigan and UC-Berkeley as an advocate of Indigenous peoples and nations. Since 2014 he has been serving as editor, publisher and policy consultant to the Yezidi Nation. In 2022 he was appointed Secretary of the Confederation of Indigenous Nations of the Middle East and North Africa.
You might also like
Amy BeamGenocide