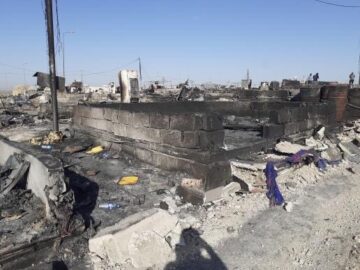 [Erbil, Kurdistan. 6 June 2021] Hundreds of tents burned down in the Sharia camp for internally displaced persons (IDPs) in Duhok province on Friday when a fire broke out.

According to Sharia camp management, 300 tents burned down on Friday, leaving 150 Yezidi families homeless and without possessions, adding that they are working with relevant authorities to respond to the needs of the victims.

“We will continue to work with authorities and the residents of the camp in order to find ways to prevent similar incidents in the future.”

“We were barely able to save our documents,” said one of the inhabitants of the tents. “At least three blocks have burned down. This is half of Sharia (camp).”

“The fire has been controlled and no one has died,” said a civil defense official. “We have not determined the reason behind the fire.”

He added the camp has a firefighting team but the density of the camp prevented them from accessing the tents that had caught fire.