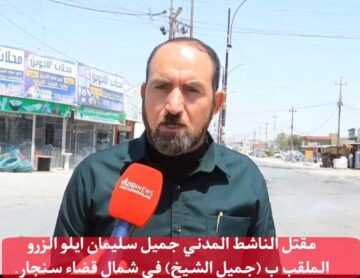 According to people who knew him, Jamil was at home with his wife and three children when he was abducted by a party of Kurdish secret police. Three days later he was found shot to death. His phone and laptop were never recovered.

“No group claimed responsibility for the killing. He was a member of the Yazidi house, and Independent Youth Group,” the Voice of Yazidis tweeted.

According to Murad Ismael, the President and co-founder of the Sinjar Academy, Sulaiman was one of the leading organizers of recent protests in Sinjar. Those protests called for the demilitarization of Sinjar after clashes between the Iraqi Army and the Sinjar Resistance Units (YBS) displaced hundreds of Yezidis in May.

The protests called for removing all armed units from residential areas, except for local internal security forces, and an end to armed clashes in civilian areas.

“We are deeply concerned about these ongoing crimes whether they are politically motivated or not,” Ismail told Kurdistan 24. “Jamil was an activist and played a key role in organising the latest demonstrations in Sinjar.”

“We are still waiting for details of this murder and call on authorities to investigate and disclose details to the public.”

Patrick Harrigan trained in comparative religion and Indology at the University of Michigan and UC-Berkeley as an advocate of Indigenous peoples and nations. Since 2014 he has been serving as editor, publisher and policy consultant to the Yezidi Nation. In 2022 he was appointed Secretary of the Confederation of Indigenous Nations of the Middle East and North Africa.
You might also like
Shingal

Ezidikhan to Turkey, PKK, KRG: “Get out!”