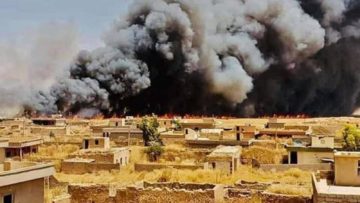 The Ezidikhan Investigative Team found direct evidence of ISIS and KRG perpetration of the fires. Islamic State sleeper cells started the fires to drive minorities out of the region. The militia of the Kurdish Regional Government (KRG) did nothing to stop these arson attacks, nor have they pursued and arrested perpetrators, confirming further Kurdish collusion.

The food crops thus destroyed by ISIS and Kurdish Forces threaten Yezidi and their neighboring peoples with starvation in August 2019 if replacement foods cannot be obtained and distributed to the people constituting an act of genocide.

Far from defending Shingal’s residents, KRG militia stand accused of collusion with Daesh with the ultimate objective of driving Yezidis and other peoples out of Shingal altogether. Together with the KRG’s policy of obstructing the reconstruction of Shingal District, similarly its inaction and even suspected collusion with Daesh in rendering Shingal uninhabitable fits a pattern of acts by regional powers keen to empty Ezidikhan of Yezidis to make it easier to occupy and control the petroleum-rich Yezidi homeland and the land corridors that pass through Ezidikhan.

On June 30th, 2019 the Lead Investigator for the Ezidikhan Investigative Team on Genocide, Dr. Abdul Qater Al-Rawi, was assassinated by assailants reportedly identified as Kurdish Regional Government secret police as an act of extrajudicial execution—a crime under international law. The Ezidikhan Investigative Team alleges that KRG secret police aimed to prevent Dr. Al-Rawi from reporting the evidence of Kurdish and ISIS involvement in crimes of genocide committed in June 2019 including arson—the intentional setting ablaze of Yezidi farm food crops of barley and wheat needed at harvest in September to feed the population.

Members of the Ezidikhan Governing Council have reported receiving death threats from Kurdish speaking persons associated with the Kurdish Regional Government. Leaders of the Mandaean, Zoroastrian, Shabak and other neighboring nations also have been visited by agents of the Kurdish Regional Government when personal threats were leveled to intimidate anyone who speaks out in opposition to Kurdish acts—yet another instance of acts with genocidal intent.

The Government of Iraq has publically set the value of the devastation of Ezidikhan’s food crops by fire at an estimated $300 million USD, putting more than 100,000 families at risk of starvation.

Ezidikhan accepts the definition of genocide as occurring in a first phase in the form of the destruction of the national pattern of the oppressed group and the second phase the imposition of the oppressor’s national pattern. Kurdish Regional Government agents working with agents of the Islamic State of Iraq and Syria (ISIS) are suspected of perpetrating these acts against the Yezidi and neighboring peoples inside Ezidikhan—acts constituting Kurdish colonization of Ezidikhan and thus the commission of crimes of genocide.

Ezidikhan notes that mass killings and dislocation of populations have occurred after the colonization first phase and beginning in August 2014 as well. The second phase of genocide in Ezidikhan began and is underway where ISIS is aided and abetted by the political apparatus of the Kurdish Regional Government and the Peshmerga under the control of the KRG.

The Kurdish Regional Government’s colonial policy constitutes an evident act of genocide. The Ezidikhan government is prepared to resist and conduct investigations of crimes, arrest and detain perpetrators, and calls on international multilateral organizations and all nations and states also to resist this imposition of genocide on the peoples of Ezidikhan.

Yezidis regard the Yezidi-led Shingal Protection Units (YBS) as the rightful Ezidikhan security body to act in the defense of Ezidikhan against acts of genocide, crimes against humanity, war crimes, torture, and extrajudicial executions.

Each statute of the International Convention on Genocide and the Rome Statute requires the permission of the states that have enacted the statute. Due to its complicity in the acts of genocide committed by the Kurdish Regional Government with ISIS forces, the Iraq government is shielding itself behind the veil of state sovereignty by not granting permission for outside investigations that would include suspects from the Kurdish Regional Government and the Iraqi government.

The Autonomous Government of Ezidikhan is committed to “universal jurisdiction” that authorizes full power to Ezidikhan’s courts and duly authorized investigative and prosecutorial agencies to investigate and prosecute anyone suspected of committing serious crimes against the Nation of Ezidikhan.

Patrick Harrigan trained in comparative religion and Indology at the University of Michigan and UC-Berkeley as an advocate of Indigenous peoples and nations. Since 2014 he has been serving as editor, publisher and policy consultant to the Yezidi Nation. In 2022 he was appointed Secretary of the Confederation of Indigenous Nations of the Middle East and North Africa.
You might also like
Uncategorized